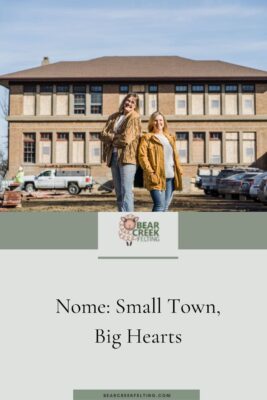 It’s been just over a year since Nome Schoolhouse officially re-opened! Our anniversary is close enough to Independence Day that we can celebrate both at once. Last year, our grand opening was also a Fourth of July party. This year, we outdid ourselves with an amazing Schoolhouse birthday /Independence Day extravaganza — parade and all!

Those of you who have visited Bear Creek know that Nome is a very small town. Founded in 1901, Nome began with about 200 residents. That number has dwindled to just 42 since then. So, it’s no surprise that our holiday gatherings have been a bit small in recent years.

We decided to change that. Chris and I joined forces with the other Nome business owners. As we only have two businesses, our “Nome Chamber of Commerce” is small but mighty! The two amazing women who run a local gift shop worked with us to organize a Fourth of July parade, fireworks, and all sorts of activities. It was thrilling to see Nome Schoolhouse buzzing with a patriotic spirit!

When we opened Nome Schoolhouse last year, we never could have imagined just how fulfilling this endeavor would become. We knew we were building something special, but we didn’t know how special. 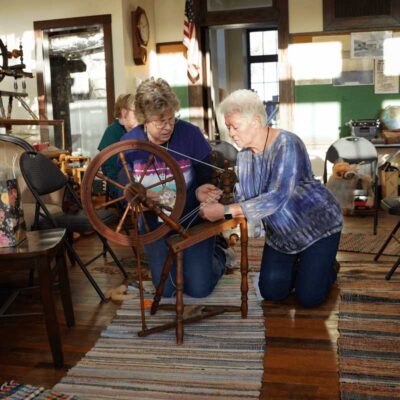 In addition to restoring a fixture of mid-century Nome, we’ve created a place for both Nome’s locals and talented fiber artists to gather. Plus, we’re now hosting alumni reunions, nature-inspired retreats, and classes on needle-felting, shepherding, and more.

And, Nome Eweniversity has its own students and alumni now, and they’re big on school pride! Check out some of the merchandise we’ve been sending out.

Despite all the activity, Nome remains a small, tranquil town, and the Nome Schoolhouse has become a welcome retreat for travelers from around the country. I personally love the deep connection with nature we’ve fostered in our rural community. The Nome Schoolhouse is a restorative, relaxing space, whether you need an artistic vacation or simply a weekend with home-cooked food and fresh air.

The fireworks may be over, but we’re still eager to welcome people to the schoolhouse, from Nome and beyond.  If you’d like to book a weekend retreat here, you’re welcome to bring your projects. I’ve got plenty of courses plus companion kits on the Bear Creek shop.

Can’t visit in person? Join us in spirit by signing up for my Needle Felting Academy. Or gift your favorite fiber artist some felting supplies and help support the Schoolhouse and Bear Creek!

Here’s to another great year at Nome Schoolhouse.

Other Articles you may enjoy: 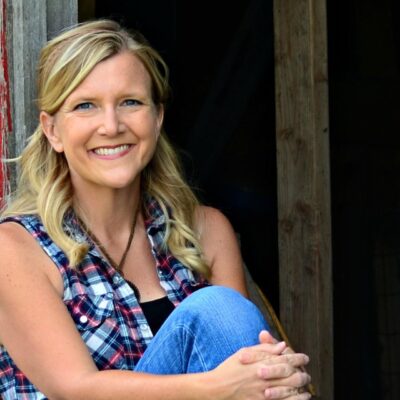